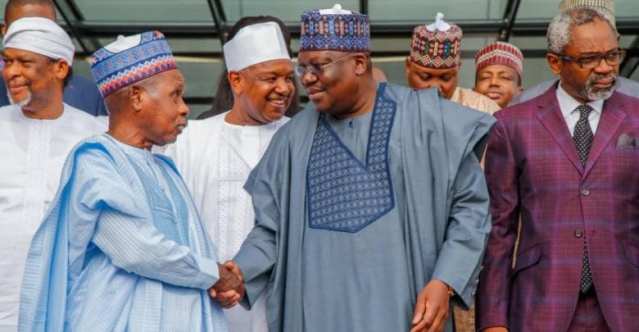 The dynamics of the 2023 presidential race in the governing All Progressives Congress (APC) may change next week, with the expected surprise entry of President of the Senate, Dr. Ahmad Lawan.
Until now, majority of the presidential aspirants in APC are from the South, with the exception of Kogi State Governor, Yahaya Bello, from the North. Some of the southern aspirants include Vice President, Yemi Osinbajo; leader of the APC, Asiwaju Bola Tinubu; Ekiti State governor, Kayode Fayemi; Governor of Ebonyi State, Dave Umahi; former governor of Ogun State, Senator Ibikunke Amosun; former governor of Imo State, Senator Rochas Okorocha; Minister of Transportation, Hon Chibuike Amaechi; Minister of Labour & Employment, Dr. Chris Ngige, and Minister of State for Education, Emeka Nwajiuba, among others.

It was gathered that the Senate President has been under immense pressure to join the race, since the northern elders mooted the idea and may succumb after the Ed-el-Fitr celebration, following a decisive meeting in Saudi Arabia by northerner powerbrokers, who had gone for hajj. He is likely to formally declare his intension to contest after the Sallah holiday.
Sources revealed that Lawan might become the dark horse who will become the consensus candidate of the APC in next year’s presidential race. Afraid that the APC might field a presidential candidate from the South and be disadvantaged, the northern elders rooting for Lawan fear that in the event that PDP also succumbs to pressure and settles for a southern presidential candidate or opts for former Vice President Atiku Abubakar or one of the consensus candidate their counterpart in the PDP chose, former Kano State Governor, Musa Kwankwaso, who recently dumped the PDP and joined the New Nigeria Peoples Party (NNPP), would become a formidable force that could topple the apple cart.

Specifically afraid that Kwankwaso may become the favourite bride of northern voters, in the event of the above scenario, northern elders wants to draft Lawan as their own consensus candidate in the APC. It was gathered that the northern elders would set out to brief and get President Buhari’s buy-in this weekend, before Lawan would be persuaded to formally join the presidential race.
One of the points the northern elders have marshalled out to convince Buhari, who, it was learnt, is tilting towards having a South East presidential candidate for the APC, include telling him that fielding a southern candidate when Kwankwaso is in the race or when the PDP could pick a northern candidate, would place APC at a disadvantage. Also, the group wants to tell Buhari that having Kwankwaso as a major northern candidate, in the expectation that APC and PDP could field southern presidential candidates, would give him an advantage and could lead to having a president who would emerge outside the scope of northern powerbrokers. The group also wants to tell Buhari that it would be disastrous for the APC to lose next year’s election, as a president from another political party would cause the decimation and possible death of the governing political party.

Saturday Sun gathered that the northern elders planning to draft Lawan are proposing a vice president from the South East or South West. Whichever geopolitical zone, between the South East and South West that does not get the vice presidential slot would produce the next Senate President, it was gathered.
Also, in the arrangement, the position of the Speaker, House of Representatives would be zoned to the North-West, while North Central would produce the Deputy Senate President. Deputy Speaker, House of Representatives will go to South South. The plan is to have all major positions shared among the six geopolitical zones as a way of having a government of inclusion.
According to the northern elders’ proposal, if Lawan is supported to become the president on the APC platform, he would do only one term, to allow South East take over thereafter. His coming is expected to consolidate the hold of the APC and also work for the political party’s penetration to the South East, in order to make the transition of power to the zone after four years seamless and easy.
Sources say the pro-Lawan group is not sure how President Buhari would take the proposal.