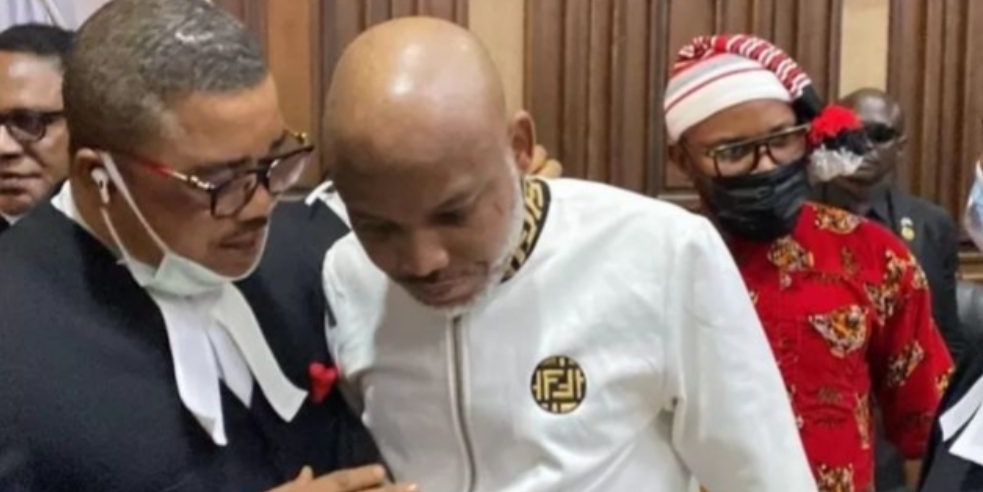 A Federal High Court in Abuja on Tuesday dismissed a fresh bail application filed by Leader of the proscribed Indigenous People of Biafra (IPOB), Nnamdi Kanu.
Justice Binta Nyako, in a ruling, said the application for bail was an abuse of court process.
The judge said she was not satisfied with the reasons the IPOB leader gave for his failure to appear in court for continuation of his trial.
The trial judge noted that from records of the court, Kanu, was represented by his lawyer on the day his bail was revoked, likewise his sureties.
“In fact, his sureties told the court that they did not know the whereabouts of the defendant and even applied to be discharged from the matter.
“Therefore, the defendant was not denied fair hearing,” she said.
Justices Nyako held that though a court could vacate a previous order when confronted with a cogent and verifiable reason, “in the instant case, I have not been given any, neither have I been given any reason to set aside the earlier order.
“The present application amounts to an abuse of court process for attempting to relitigate an issue already decided by the court.
“If the defendant is dissatisfactory, he has the Appeal Court to go to.
“This application is accordingly dismissed,” the judge ruled.
Nyako also adjourned the trial until Nov. 14 for the report of the Court of Appeal decision on the appeal filed by Kanu’s lawyer, Chief Mike Ozekhome, SAN. seeking the order of the court quashing the remaining seven-count charge levelled against his client.
The News Agency of Nigeria (NAN) reports that on May 18, the court dismissed the bail request filed by Kanu.
Ruling on the bail application, Nyako, held that the issue of Kanu’s absence from court since 2017 must first be determined before his bail request can be heard. (NAN)