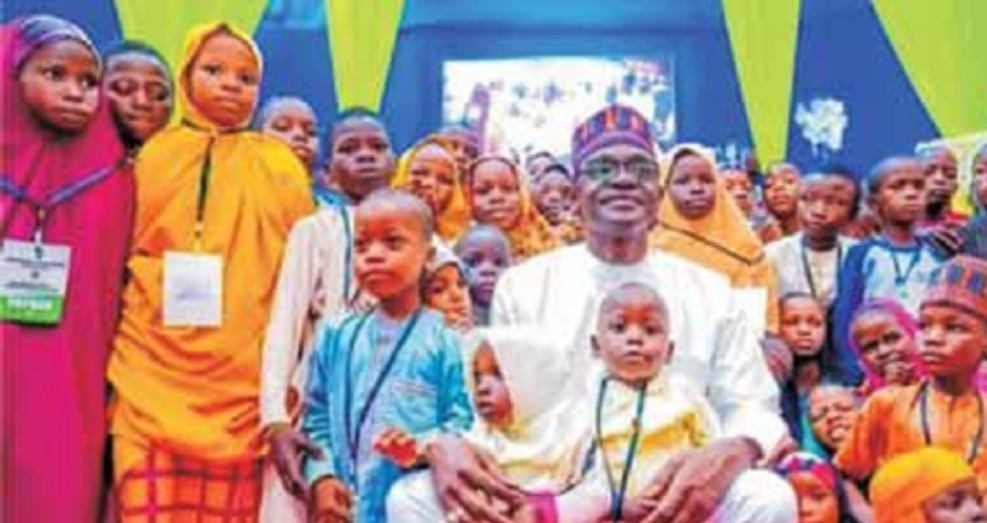 By Salisu Na’inna Dambatta
The picture had a profound impact on me as it tells those thousand proverbial strories: it was of an orphan sitting comfortably on the lap of the Governor of Yobe State, Alhaji Mai Mala Buni.

Imagine a state governor surrounded by widows and young orphans, including two of them sitting comfortably on his lap and others leaning on his kindly shoulders. They all looked cheerful; at ease with themselves in the company of their state governor who treated them in the same way the most responsible father treats his biological children.

Yes, he swore to uphold the dignity and promote the welfare of all citizens and residents of Yobe state as required by the constitution. However by specifically reaching out to orphans and women who lost their breadwinners and showering them with love and genuine kindness, Mai Mala Buni can be said to have taken his duty to the people to a very high level.

At the reception for the 200 orphans who were drawn from the 17 Local Government Areas of the state, the governor said his administration gave each of the orphans N50, 000 to start a small business for self-reliance. He said: “Our decision to wade into supporting the orphans, widows among other vulnerable groups, is to empower them with a start-up capital for self-reliance.”

Indeed, a youngster can successfully start a micro business with N50, 000 as seed capital.

There are hundreds of orphans and widows in Yobe state following the unfortunate insurgency by Boko Haram. Hundreds of heads of households were killed by the insurgents. Many married women became widows and their children orphaned. Some of the orphans were orphaned before they were born.

He eleborated on his motive for the gesture to the orphans and widows, “We must help those who lost their parents taking into cognizance the decade age insurgency in our areas and the number of orphans and widows across the state.”

Beside giving seed capital to orphans and widows, the state government is sponsoring the education of indigent students. Doing this was listed in the reasons for the launching of N25 billion Appeal Fund for Education in February 2022.

The Mai Mala Buni administration has targeted 475 Tsangaya Schools in all the Local Government Areas to give succour to the teachers and pupils. This intervention is under the Almajiri Schools Support Programme which he initiated to cushion the hardships of the vulnerable teachers and students of such schools.

Alhaji Mohammed Goje of the Yobe State Emergency Management Agency said that in the current harmattan season items comprising warm clothing, blankets, bags of rice and maize, seasonings, soaps, mats, buckets and cutlery sets were delivered to 255 Tsangaya Schools. The intervention is continuing until all the targetted 475 Almajirai schoold were covered.

Buni’s Yobe state government runs a Free Healthcare Service scheme for poor and vulnerable people from which orphans and widows benefit. The governor said the scheme has been remodelled: “The expanded Free Healthcare Scheme will greatly improve the accessibility of high quality and effective healthcare services in the state, particularly to the poor and vulnerable people,” he said.

There is no doubt that, Mai Mala Buni has impressed the people of Yobe State in his first tenure as governor as testified by communities and leaders that appreciated his unceasing determination to leave permanent footprints in the state.

One of the numerous awards and testimonies Mai Mala Buni earned as the Governor of Yobe state came from Alhaji Abba Hassan, the District Head of Buni Yadi who publicly told him: “You have done what you were supposed to do. You have put legacies all over the place. You have put up footprints which even after your death will speak for you. May Allah reward you abundantly.”

Salisu Na’inna Dambatta is a retired Federal Director of Information.