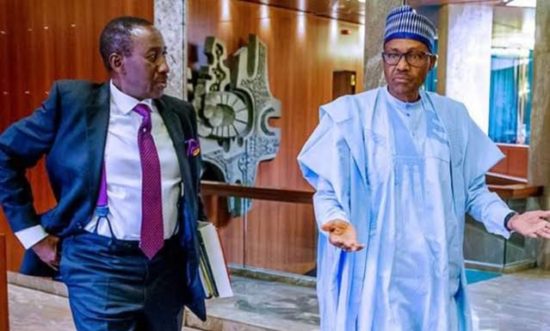 In 2017, the Federal Government, through the Office of the National Security Adviser (ONSA), launched the Policy Framework and National Action Plan for Preventing and Countering Violent Extremism (P/CVE).

President Muhammadu Buhari on Aug. 24, 2017 gave a directive on the implementation of the framework and national action plan for the P/CVE stating roles and regulations as well as urging state and local governments to get involved.

“This Policy Framework addresses all aspects dealing with our short, medium and long term goals. The Policy Framework will mainstream peace building into our efforts in dealing with the economic and social consequences of violent extremism in rebuilding and stabilizing the North East and other parts of Nigeria recently affected by violent conflicts.

“In developing this Policy Framework, we ensured the participation of multiple Agencies of Government and the Civil Society, including women, youths, unions, faith based organisations, the media and academia, and benefited from the inputs of the international community.

“This effort has resulted in this Policy Framework which shall be implemented by all relevant Federal Ministries, Departments and Agencies as part of their annual activities. States and Local Governments are equally encouraged to mirror and develop Action Plans that are relevant and specific to their communities in addressing the threat of violent extremism,” the president said.

“Through existing and new platforms, the framework seeks to build capacity, improve coordination, strengthen the justice system and by integrating strategic communication, provide alternative narratives to violent extremism,” he said.

The presentation of the policy framework was an acknowledgment by the government that there had to be a broad structure capable of underlying the various interventions launched to tackle the menace of violent extremism in the country.

The policy framework has four core objectives, which are: to institutionalise, mainstream and coordinate P/CVE programmes at national, state and local government levels; and to strengthen accessible justice system and respect for human rights and rule of law.

Others are: to enhance capacity of individuals and communities to prevent and counter violent extremism and recover from violent occurrences; and to institutionalise, mainstream and integrate strategic communication in P/CVE programmes at all levels.

Nigeria’s Counter Terrorism Centre (CTC), established in 2012 and domiciled in ONSA, is responsible for driving government’s efforts in the area of P/CVE.

Since becoming the NSA, Monguno has strengthened the CTC to spearhead the implementation of the Policy Framework and National Action Plan for Preventing and Countering Violent Extremism.

Through collaboration with bilateral and multilateral organisations, as well as partner-countries, the Office has embarked on significant efforts leading to appreciable achievements of the goals of Nigeria’s P/CVE programme.

For instance, in collaboration with the International Organisation for Migration (IOM), the Office has developed the Demobilisation, Disassociation, Reintegration and Reconciliation (DDRR) Action Plan for the country.

An Operational Project Team (OPT) was also constituted to monitor the implementation of the DDRR.

The Office of the National Security Advisor (ONSA), together with the European Union (EU) and the United Nations Office on Drugs and Crime (UNODC), recently launched the STRIVE Juvenile project in Nigeria aimed to prevent and respond to violence against children by terrorist and violent extremist groups.

Through this new STRIVE action would be taken to develop coherent strategies that better serve and protect children by enhancing safe and resilient communities, in which human rights and the rule of law guide the approach to combating violent extremism.

At the launch, Monguno, represented by Rear Admiral YEM Musa, Head of CTC, stated that “the launch of the STRIVE Juvenile project provides an opportunity to demonstrate the firm commitment of the Nigerian Government to counter terrorism and highlights our efforts when it comes to preventing and countering violent extremism affecting children”.

Also, in partnership with UNDP, it is embarking on a series of sensitisation workshops on P/CVE targeting the National Youth Service Corps, which could lead to effectively grassroots network of P/CVE community outreach.

However, in spite of President Buhari persuading states and local governments to replicate the action plan to suit specific needs, involvement in P/CVE programmes by states has been minimal.

In actualising the Policy Framework and National Action Plan for P/CVE, it is important for government at all levels to domesticate and mainstream P/CVE efforts of the Federal Government.

Some states have shown noteworthy interest; for instance, Nigeria is a Global Community Engagement and Resilience Fund beneficiary country and Kaduna and Kano states are members of the Strong Cities Network.

However, much more still needs to be done by states and local governments, whose communities are directly at risk of violent extremism and radicalisation.

ONSA has been making efforts to get states more actively involved in its P/CVE programmes in line with the first core objective of the policy document.

In 2017, as part of implementation of the policy framework, the Office partnered UNDP to organise PCVE Sensitisation and Community Advocacy Workshops in five Northern states (Kogi, Kano, Kaduna, Plateau and the Federal Capital Territory).

The workshop was to create awareness among communities and stakeholders on how to integrate efforts in preventing and responding to violent extremism.

ONSA has been sending a team of facilitators to visit states to conduct stakeholders’ workshops with the aim of delivering the benefits of the strategy to them.

It has also been providing capacity to MDAs at state level to domesticate implementation of the Federal Government’s P/CVE programmes in the fight against terrorism.

It is not hard to see why collaboration is crucial to any modern-day effort to fight violent extremism and terrorism.

At government level, whenever there is a terror attack, federal, state and local governments bear both the burden and the loss.

In the past, the argument had always been that intervention efforts at the national level were lacking in adequate coordination and harmonisation.

However, the current ONSA has since made coordination, inter-agency collaboration and strategic communication crucial creeds which drive government’s P/CVE programmes, because it understands that the multiplicity of uncoordinated efforts can be counter-productive.

It is expected that the Policy Framework and National Action Plan for Preventing and Countering Violent Extremism will be reviewed every three years.

Therefore, key aspects of its next review should include a very specific definition and clarification of the appropriate roles and responsibilities of states and local governments as it clearly has for MDAs.

Also, ONSA should continue to provide expertise, research and support to states to enable them increase their level of participation in the Federal Government’s P/CVE programmes. (NAN)